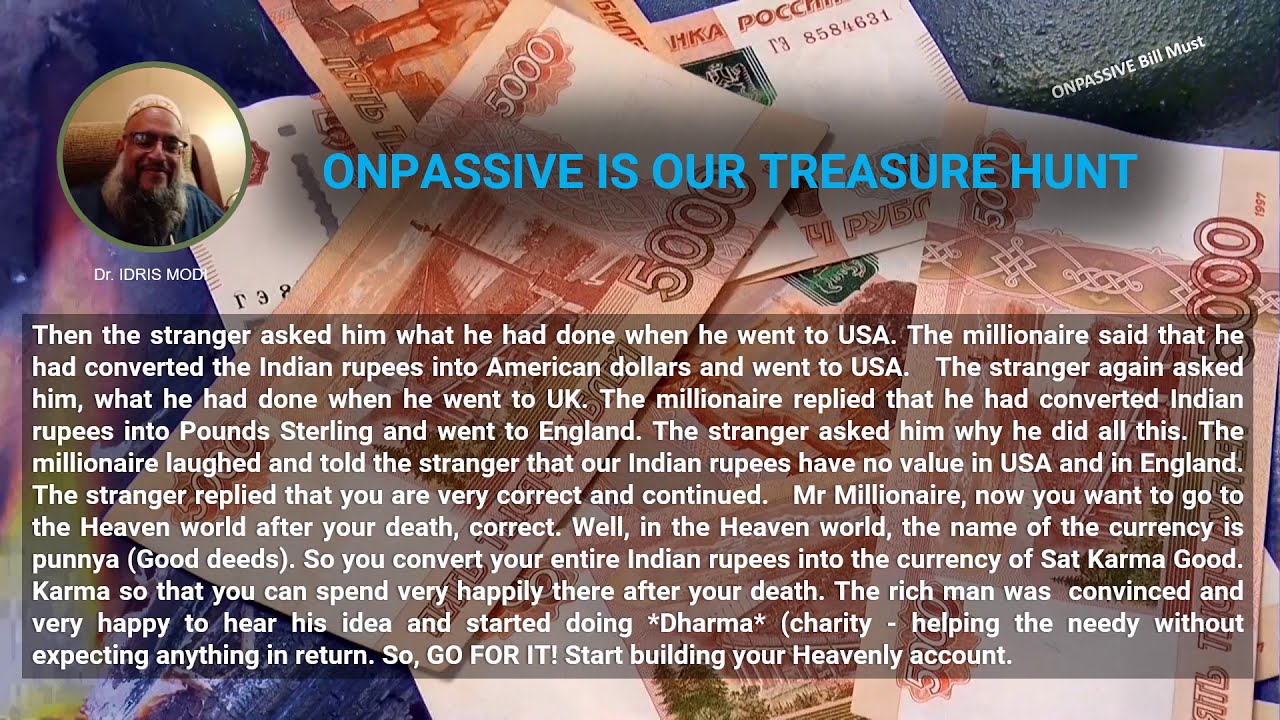 A multi *millionaire* was travelling in his car.

On the way, he was listening to a Satsang(preaching) of a certain religious Saint.

The Saint was preaching that, *everyone in the world is after money only. But they are ignorant that they cannot take their money with them after their death. But Still they are after money only and do whatever possible ways to get the money*

The millionaire got annoyed of his statement.

He said to himself that since the Saint has no money with him, he is giving a Lecture like this.

The next day, the millionaire called all his employees and advised them to give him an idea so that he can take all his wealth alongwith him after his death.

Every one thought that their boss has gone mad and tried to avoid him.

Days passed by.
Suddenly one day a stranger approached the millionaire and informed him that he had heard about his query & he has one brilliant idea.

The millionaire could not believe his ears as everyone has declared him “Mad”.

The millionaire was very eager to hear his idea.

The stranger first asked him whether he had travelled abroad?

The millionaire said that he had visited almost all countries.

Then the stranger asked him what he had done when he went to *USA*?

The millionaire said that he had converted the Indian rupees into *American dollars* and went to USA.

The stranger again asked him, what he had done when he went to *UK* ?

The millionaire replied that he had converted Indian rupees into *Pounds Sterling* and went to England.

The stranger asked him why he did all this?
The millionaire laughed and told the stranger that *our Indian rupees have no value in USA and in England*.

The stranger replied that you are very correct and continued.
Mr. Millionaire, now *you want to go to the Heaven world after your death, correct?*.
Well, in the *Heaven* world, the name of the currency is *punnya* (Good deeds)
So you convert your entire Indian rupees into the currency of *Sat Karma/Good Karma* so that you can spend very happily there after your death.
The rich man was convinced and very happy to hear his idea and started doing *Dharma* (charity – helping the needy without expecting anything in return😉)🙏🏼

So, *GO FOR IT! Start building your Heavenly account!👍🏼