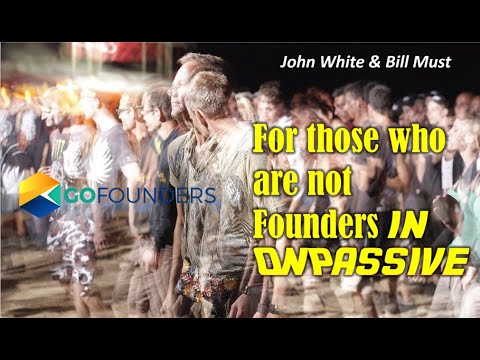 #ONPASSIVE #GoFounders #AshMufareh
For those who are not Founders in OnPassive: It is not too late! And for those who have registered as pending founders; for what are you waiting? Are you waiting for the price of $97.00 to increase to $149; when OnPassive starts its initial launch to test the products? Or are you waiting for the public launch to make sure OnPassive is a real company? When OnPassive opens to the public; that is the end of the Founder’s position! It will be gone forever! No amount of money you have will make you a Founder in OnPassive! There will be two positions left after the Public launch: 1.You can become a Reseller of OnPassive’s Incredible Portfolio of Digital products, or you can be a Customer of the best products your money can buy! But not any amount of money, you pay, will you become a Founder, when OnPassive launches publicly! Every Founder in OnPassive saw the value of OnPassive and reached the best decision that they ever made. The Founder’s position in OnPassive is Priceless! Priceless! Yet those Founders paid $97.00 onetime out of pocket and less than $275 approximately to become a customer one time out of pocket. Now Founders and their families are set for life! If all they did was to get in OnPassive; they are positioned where they do not have to lift a finger to work their businesses in OnPassive! OnPassive’s Powerful; Done for you System; does all the work for them!! The Founders pay OnPassive to work their businesses; from the profits that customers will pay OnPassive to use OnPassive’s products. When a person uses the Internet to conduct their business and socialize with family and friends; They will use OnPassive’s products. All OnPassive’s products are the absolute best on the market and priced lower than any other companies’ products! Now when they realized that they could have been Founders in this Dynamic Technological Giant called OnPassive: It will be too late! They waited too long to make that critical decision that could have altered their family’s Legacy!! Do you remember how these tech Giants, who dominate the Internet today, started out? And you wished that you could have been there when they started! When they started, would you had come aboard, as the ones who took advantage of those opportunities? And now you are kicking yourself and crying because you let those opportunities passed you by! Well, OnPassive is this Once in a Lifetime Opportunity that is right in front of you; Telling you to come aboard; there is still room left to be a Founder! Those other companies did not let people become Founders; only those who were related to and who were close friends of the owners of those businesses! Those companies made the Bulk of their money from selling stock to investors. OnPassive is privately held and owned and will be that way! OnPassive will reward its Founders, for the trust, that they had, in Mr. Ash Mufareh’s Dream and Vision when he created OnPassive!
$97.00 stand between where you are now: and Financial and Time freedom! But there are those who waste $97.00 on trivial things! $97.00 put a person in a class that will change their families for generations! These $97.00 come risk-free! No strings attached; today and always! With other companies, you would have to give the birthrights of your first-born child to them to get what OnPassive gives you! You will not have to mortgage your homes if you had one! You would not have to worry about $97.00 every month: You pay once out of pocket for this position as a Founder and then all founders become customers of OnPassive for less than $275 one time out of pocket! Then those Founders will let OnPassive pay their monthly subscriptions, from commissions Founders earn, from customers, who use OnPassive’s Portfolio of Digital and Artificial Intelligence-driven products!
That my friends are no brainers: We have been given the map; as Founders; to where the treasure is located: That map leads us to OnPassive! That map is made up of 97 numbers! $97.00! Wake up you who are sleeping on OnPassive!! Those who are Dreaming about a Miracle!! That miracle is happening right before your eyes! Become a part of this Miracle called OnPassive: Not a spectator to this Miracle: Spectators pay! Founders get paid! No one can make you become a Founder in OnPassive! Just remember this: OnPassive is a Reality! Whether you believe it or not! Thanks to Mr. Ash Mufareh and family and staff: we are in it to win it!