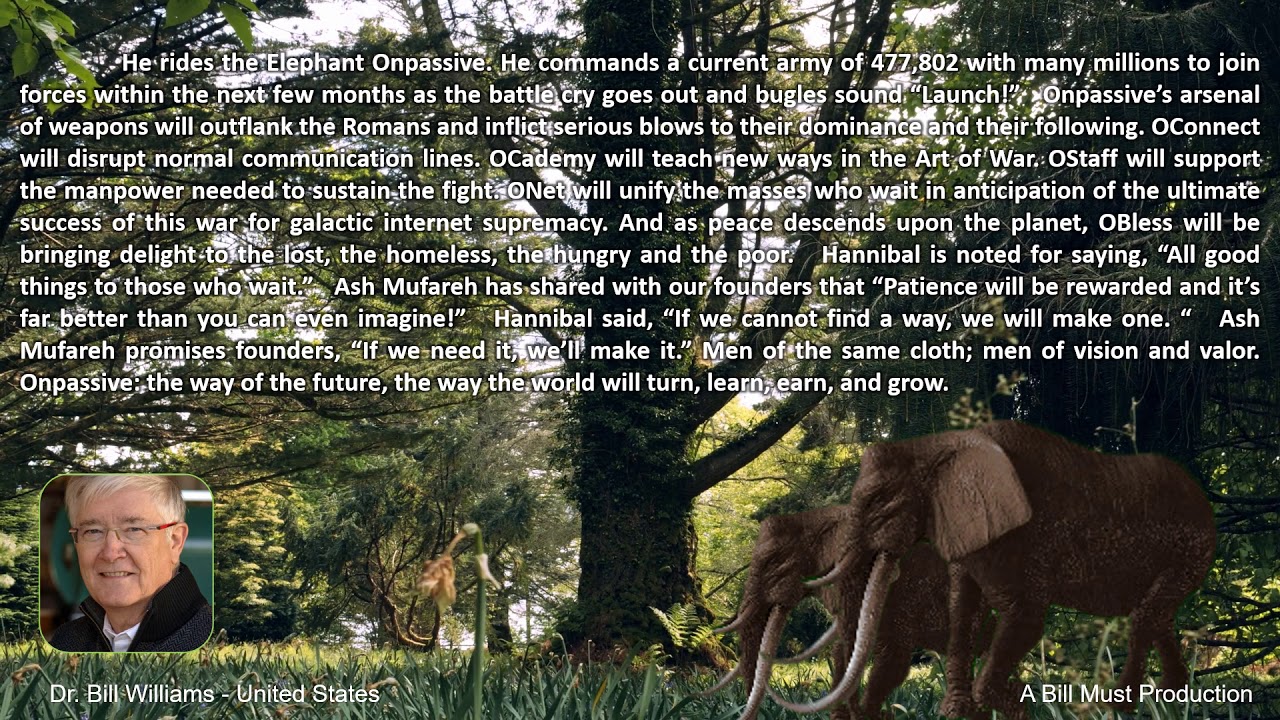 #ONPASSIVE #ONPASSIVEReview #ArtificialIntelligence #GoFounders #AshMufareh
The Elephant In The Room. The elephant is a disruptive force, one that cannot be denied. So noted the Roman Legions facing battle with Hannibal’s Carthaginian army of War Elephants. Hannibal used his Superweapon War Elephants to disrupt the Roman Phalanxes to allow his contingency of Nubian cavalry, Iberian swordsmen, Balearian slingers and other warriors to surge to victory. History records that Hannibal took the road less traveled, the road most difficult, up and over the Alps, to attack his enemy, Rome, in the Second Punic Wars. Hannibal rode his elephant, Surus, into battle. He was a dominant force, a master of strategic planning and commanded the massive army in victory after victory, inflicting the greatest losses that any Roman armies ever experienced. The case could be made that Ash Mufareh is a modern-day Hannibal, the gifted leader of a multi-national, multi-cultural army set to do battle shortly with the current-day Roman Legions commanded by their Consuls named Gates, Zucker, Page, Brin, Dorsey, and Yuan.
He rides the Elephant Onpassive. He commands a current army of 477,802 with many millions to join forces within the next few months as the battle cry goes out and bugles sound “Launch!” Onpassive’s arsenal of weapons will outflank the Romans and inflict serious blows to their dominance and their following. OConnect will disrupt normal communication lines. OCademy will teach new ways in the Art of War. OStaff will support the manpower needed to sustain the fight. ONet will unify the masses who wait in anticipation of the ultimate success of this war for galactic internet supremacy. And as peace descends upon the planet, OBless will be bringing delight to the lost, the homeless, the hungry and the poor. Hannibal is noted for saying, “All good things to those who wait.” Ash Mufareh has shared with our founders that “Patience will be rewarded and it’s far better than you can even imagine!” Hannibal said, “If we cannot find a way, we will make one. “ Ash Mufareh promises founders, “If we need it, we’ll make it.” Men of the same cloth; men of vision and valor. Onpassive: the way of the future, the way the world will turn, learn, earn, and grow.
DR BILL WILLIAMS
PLEASE GET BACK TO THE PERSON THAT CONNECTED YOU HERE OR HIT THE INVITATION LINK HERE AND JOIN ME.